REM MT makes donations and investments to the tune of R$2.4 million for firefighting actions 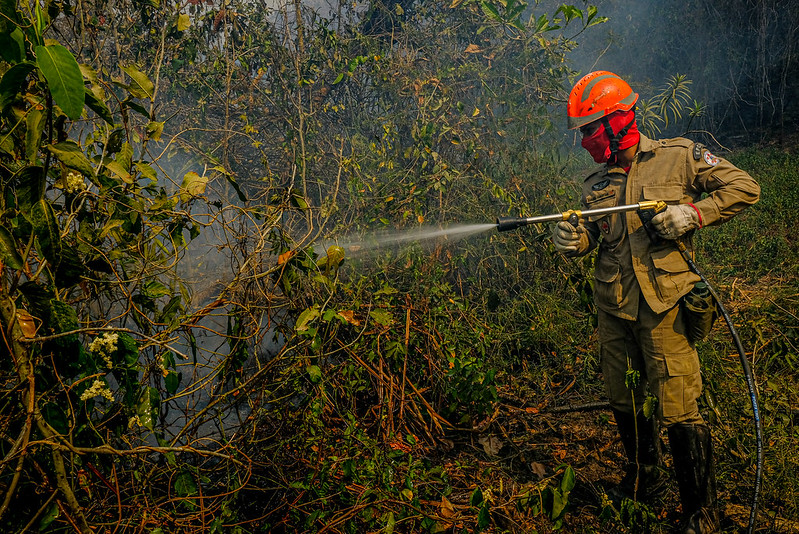 In Brazil, the dry period (April to October) always carries the risk of forest fires and sets the alarm bells ringing at state authorities. According to Instituto Centro Vida (ICV), 2020’s wildfires in the Pantanal, a biome that encompasses the world’s largest floodplain, destroyed 40% of the area contained within the limits of Mato Grosso. The REM Mato Grosso Program operates on various fronts, and fire containment is one of these, in tandem with the local communities and organs. In addition to the Pantanal, which occupies 7% of the state’s total area, Mato Grosso also boasts two other key Brazilian biomes: the Amazon and the Cerrado, the most biodiverse Savana on earth, with roughly 5% of the planet’s total flora and fauna.

The Mato Grosso REDD Early Movers Program (REM MT) comes as recognition of Mato Grosso’s results in deforestation reduction over the last 10 years. International cooperation between the German and British governments donates vital resources to the initiative through the German Development Bank (KfW) and UK Department for Business, Energy & Industrial Strategy (BEIS), and these funds are then channeled into forest-conservation actions to reduce CO2 emissions. The initiative is coordinated by the Mato Grosso state government through its Department for the Environment (Sema-MT), and is operationally and financially managed by FUNBIO.

In 2021, the program pumped R$2.4 million (approx. 450 thousand USD) into supporting monitoring activities, accountability measures, and inspection regimes outlined in the state-drafted Mato Grosso Action Plan for Combating Illegal Deforestation and Forest Fires. This was the third year in which REM MT was offering such robust support to initiatives tackling forest fires in the region. For Fernando Sampaio, general coordinator of REM MT, fire causes immeasurable losses for the state in terms of biodiversity and agribusiness yields.

“According to data from the Intergovernmental Panel on Climate Change and the Climate Vulnerability Study conducted by the Mato Grosso State Department for the Environment, we now know that one of the most critical effects the present climate crisis is having on the state is a longer, hotter dry season, with a commensurate rise in fires”, says Fernando, underscoring the role REM MT plays during fire season. “The program’s support for the state’s strategy for the prevention and combat of deforestation and forest fires is one of its main and highest-impact fronts in terms of mitigating climate change.”

Under the auspices of REM MT, the state’s action plan has seen the renewal of the Planet satellite-monitoring system so that Mato Grosso can continue to track deforestation in real time and take prompt prevention and surveillance action in affected areas. The funds were also applied to equip and restructure the Environmental Police (Dema) and other inspection organs fighting environmental crime and to hire a company specializing in the removal of heavy machinery used in illegal deforestation.

Indigenous peoples at the forefront of fire-management

Furthermore, the REM MT Program donated 100 personal protection equipment (PPE) sets so that indigenous communities can protect their Territories (ITs), and backed that up with training. So far, the Fire Brigade has instructed the populations at the Perigara and Tadarinama ITs in basic firefighting techniques.

“Being first on the scene to tackle a fire is not just about protecting your people, your homes or village, it’s about conserving the state’s forests and biodiversity. Immediate combat vastly increases the chances of successfully quenching a fire. The smaller the area affected, the lower the CO2 emissions will be, and that’s one of REM MT’s core goals”, he adds.